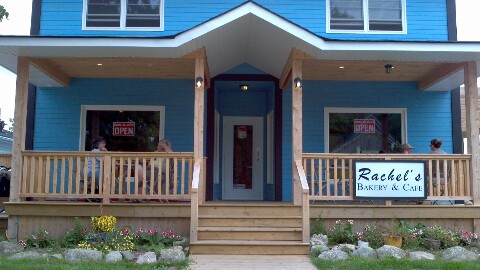 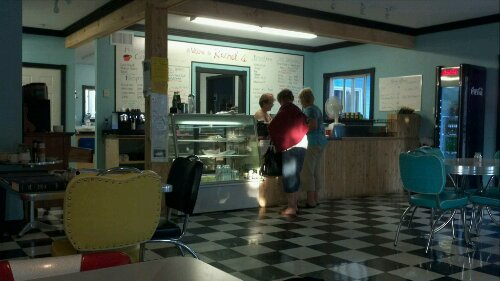 I decided to go for a evening stroll on my bike and stopped in at one of the 3 restaurants in town. I met the store owner of Rachel’s Cafe. A very nice lady who I had the pleasure of chatting then praying with in between her customers. She had just moved to Lions Head and started her business in June of this year. I told her I was travelling on my bike and she like many others, was amazed at the distance I had travelled. I shared about my ministry and she told me that if it wasn’t for God she wouldn’t have this restaurant. She also mentioned how she was hurt in several churches. I assured her that God was bigger than that and her relationship with him didn’t depend on her attending those churches. She mentioned other disappointments and hurts she had with a friend. Later when I left I ha d the opportunity to pray with her to rededicate her life to Jesus and to remove any bitterness or hurt that was still there. Also I prayed that God would bless and prosper her business. She was very grateful for the prayer. During this time in the Cafe I was also able to witness to 2 older ladies who wanted to know how to get to Sturgeon Falls.

I gave each one the 4 spiritual laws pamphlet and one lady told me that she already belonged to a church.  I told her that it wasn’t about that but about knowing God personally on a one to one basis. She told me she just came in for a coffee! I assured her that this was her day of salvation. The other lady told me that she was a good person and felt God would accept her to heaven when she died. I told her that if she accepted Jesus as her Saviour as it says in the bible she will have that assurance from this day forward. She said she had her own beliefs and handed back the pamphlet. I asked her would she not reconsider and at least read the pamphlet. She refused. I told her that one day she may feel differently and it is important she not overlook Jesus. I wished her well and both ladies went on their way

Later that evening I was sitting in the park and I came across 3 young teenagers sitting at a picnic table. I sat not too far away. One of them started a conversation with me and before you know it he came to sit at the picnic table beside me. He asked me many questions since he knew I was from out of town. He was a very friendly and polite young man a pleasure to talk to. He asked me what had caused me to come all this way on a bike by myself.

I told him about Jesus and how he changed my life. He asked more questions and I was able to share with him more of the gospel and how God has a plan specifically for him and for his life. He told me that he drinks and smokes too much and that he wouldn’t fit into church. I told him that God takes us just the way we are.  He can help you with that and change your life for the better. Then he was being called away by a group of his friends who were waiting for him. He thanked me and told me he would read the pamphlet and visit my blog.

When I was leaving the park early in the morning to bring back the washroom key, I met up with gentleman who asked me where I was headed. I told him about my trip from Orangeville to Tobermory and back. By yourself? “Just me and Jesus.” I assured him. I told him the message of hope and how God has a plan for your life and wants to be your friend. He told me he didn’t go to church because he found most are about the organization and not the message. I agreed with him. He mentioned he thought what I was doing was great and very positive. He also said that he would share the 4 spiritual laws pamphlet with a family friend who just lost her best friend to cancer. And also his Grandmother who was a strong believer. So I gave him another pamphlet to share.

By the way if you’re traveling through Lions Head be sure to stop in at Rachel’s Cafe and Diner. She has the best food and coffee in town. Free WiFi access too!

One thought on “Lions Head Ministry”

All about Jesus Christ

4 Spiritual Laws Now is the time for Salvation!

Watch this! Who is Jesus?

Watch another! How to get saved.

Must read for every Christian! What is speaking in tongues?